She's here!  On Friday January 25th, 2013 Flory Lee Murphy was born.  She is such a tiny, precious little thing and we are blessed beyond words to have her as a part of our family.  This time labor was not only very different, but MUCH quicker than with Liam.  I am still in shock at how quickly everything happened.  Thursday day I started in with some braxton hicks that became more and more consistent and quickly started turning into labor contractions.  They really weren't that painful so I wasn't sure how real it was until I finally started timing them and realized they were only about 5-7 minutes apart.  After a couple hours I called the Dr who said to give it a couple more hours to see if they picked up and/or got more intense.  At this point it was 10PM, so I decided to take a bath and then try and get some sleep.  Needless to say I hardly slept as I continued to have them, yet they did not get any closer or stronger.  Because I wasn't in serious pain, I decided to wait to call the Dr back.  Finally at 6AM, after an entire night of contracting, I called them back.  They told me to go ahead and come on in since I had been going for so long and they would check me and at the very least try and help me get some sleep.  Josh and I immediately got up and showered and called his parents to come over to watch Liam.  By 7:30 we got in the car to head to the hospital and at that point, there was NO doubt I was in labor.  With all that activity, my contractions has picked up to the point where I couldn't talk through them.  They were still NO where near as painful as they were with Liam, however, so that was a good thing.  After checking in to the hospital and getting settled, the midwife came in and checked me and I was dilated to a 4.  There was no doubt we were having a baby that day..wahoo!  It still took another 2 hours or so to finish all my paperwork, get my enema, etc. before I finally got the epidural.  By that time my contractions were excruciating and I was beyond thrilled to feel that numbing medicine of the epidural race through my veins.  Instant gratification.  From that point on I labored peacefully for another couple of hours.  They came to check me around 11:30 and I was still a 4, and there was meconium in my water, so they were a little concerned that Flory was under stress for some reason.  They decided to give me another hour and then see where I was and talk about where to go from there.  Well, not only 45 minutes later I felt intense pressure and I called the nurse who checked me and said, "yep, there's the head"!  I could NOT believe it.  In 45 minutes I went from a 4 to a 10 and she was crowning!  They immediately prepped the room, I pushed for 10 minutes through 4 contractions and out she came.  It was unreal how much easier it was.  Don't get me wrong, it still hurt like crazy, but because it was so quick it didn't even phase me!  After pushing an hour and a half with Liam, this was a breeze!

We are starting week 2 at home with Flory.  So far, she has been great.  Much easier than Liam at this point (knock on wood).  She breastfeeds great, sleeps, pees and poops.  After being used to Liam only taking 1 two hour nap a day, it amazes me how much she sleeps!  I can't get over all the free time I have during her naps.  Liam is still in school during the week, so it has been very nice to be able to rest and recover while he is happily playing at school.  She is also doing great at night.  She is going about 4 hours in between feedings, and goes right down afterwards in her bassinet.  I really can't complain!! 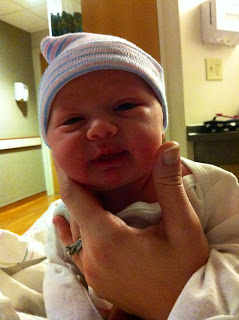 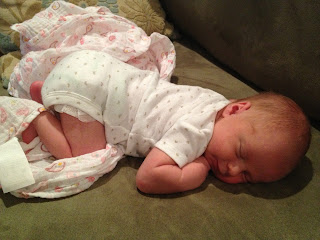 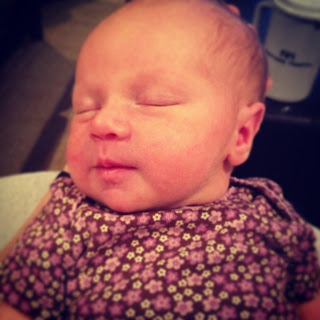 Speaking of Liam, he has been adjusting well.  He asks about "baby Forwee" a lot and has been a big help, but mostly he just sticks to his own things for now.  I think when she is much bigger and able to play with him, he is really going to enjoy her.  We have had one trying night, when he was up ALL night long coughing/congested and crying.  Tending to him in between feeding Flory every couple of  hours was tough.  I think Josh and I got a total of 2-3 hours of sleep that night.  But, as tough as it was, we managed and made it through.  Hopefully those nights will be few and far between and we will tackle them as they come.
Posted by Meghan Murphy at 6:45 AM 1 comment:

Looks like we have another chubby cheek baby on our hands!  Josh and I were able to convince our Dr. to give us one last ultrasound this past week just for fun.  We did this with Liam too and thought it was so cool because we could actually see a close up of his face.

Below is the picture of Liam at 36 weeks..look at those chubby cheeks! 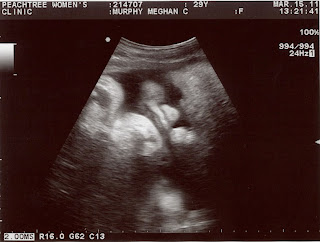 And here is a pic of our little girl's face from yesterday (also 36 weeks).  Not as clear as Liam's photo, but you can still see the chubby cheeks.  Love! 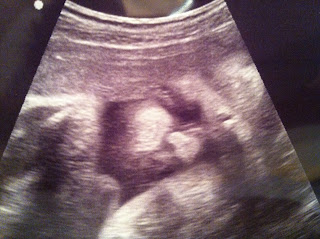 Posted by Meghan Murphy at 10:19 AM No comments:

Love this photo from this morning.  Everyone is so relaxed :) 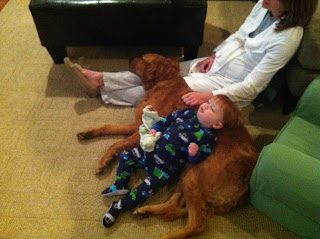 Posted by Meghan Murphy at 7:41 AM No comments:

Here are a couple videos of Liam doing his rendition of "Row Row Your Boat" and "Baa Baa Black Sheep".  He LOVES to sing and we constantly catch him singing these songs under his breath.  Be sure to turn up your volume!


Posted by Meghan Murphy at 7:54 AM No comments:

Josh and I just got back from our little getaway this past week and it was fabulous.  I was definitely a little anxious about leaving as we have only left Liam overnight a handful of times and it never gets easier.  I will say that Liam is so in love with his Nona and Cap Cap right now that I knew he would be fine, so that helped ease my anxiety quite a bit.

For 3 whole days, Josh and I: slept in, took naps, got pampered at the spa, took hikes, read books, watched movies, had fabulous dinners, read the paper at breakfast and just CHILLED OUT.

Of course by our last day I was missing our little guy like crazy, so even though I was bummed to leave, I was equally anxious to get home.  Liam was VERY excited to see us and for the first hour was so hyped up about everything...it was really cute. After about an hour though, the excitement had worn off and we had a little bit of a rough evening getting him back in the swing of things and the rules that mommy and daddy make him follow.  I think he was very much liking the rule-free house that Nona and Cap Cap gave him :)  It only took a couple days though and he is now pretty much back into the swing of how things work at home.

We can't thank Nona and Cap Cap enough for letting us take this much needed trip.  Crazy to think that the next time they will be in town will be for the birth of our baby girl! 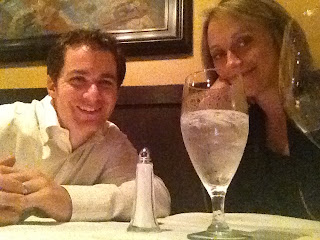 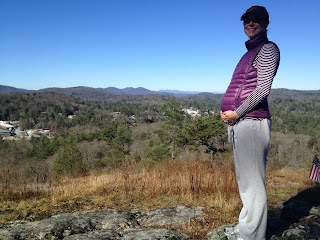 Sunset Rock Hike - as easy as this hike was..it was NOT that easy at almost 8 months pregnant! 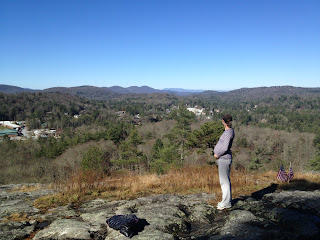 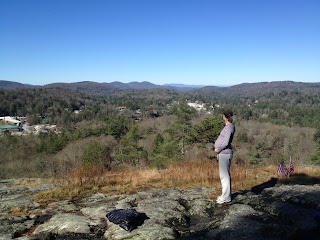 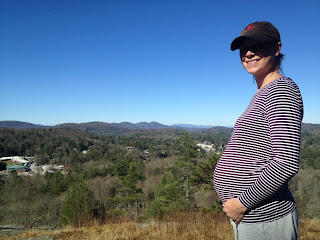 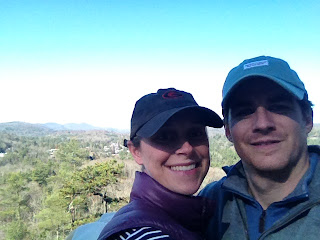 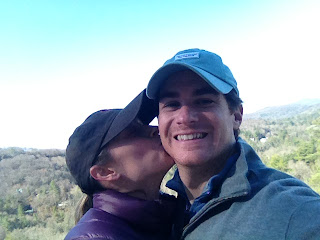 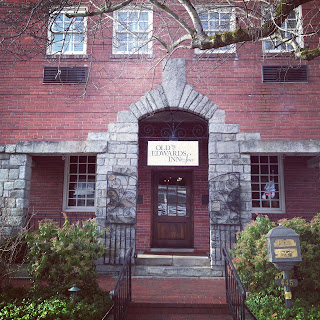 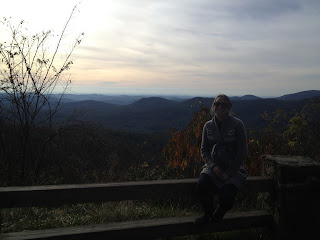 Gorgeous view...wish it wasn't so dark 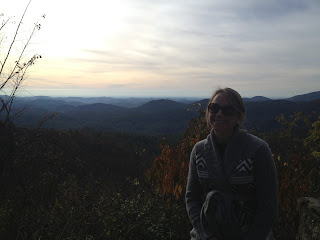 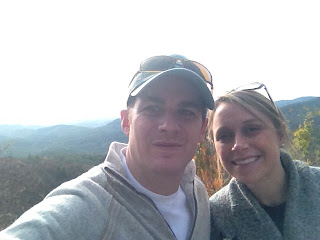 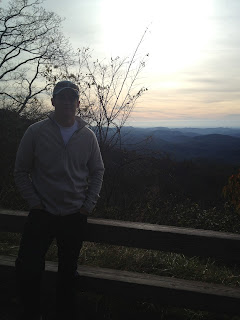 Love, love this pic (even if it is dark)

Posted by Meghan Murphy at 8:48 AM No comments:

Our little guy is obsessed with dancing.  His only problem...he only has ONE move.  It's so freaking cute though.  Here's a morning dance session to one of his videos.  Love when he notices daddy with the camera and says "cheese"

I know I have been sort of MIA lately.  Honestly I'm trying to decide if I want to continue with this blog.  Life has become a little crazier lately with a toddler and getting ready for baby girl, and I honestly am not sure I have the time to keep up.  For now, I'm going to keep up with any important blogs but don't be surprised if that slowly trickles off as well :) Who knows, maybe after baby is born I'll have a resurgence of energy and will get this blog back on track.

As I mentioned our house has been CRAZY lately.  First of all we have been dog sitting like mad which only ads to the mix.  First we watched our friends 8 year old chocolate lab for a few days and now we are watching my sister's 5 month old golden doodle puppy.  Yep, that's right.  We have a full on puppy at our house at the moment.  Ever since they got her (Cricket) Liam has been pretty scared of her given her playfulness and nipping, so to say I was worried about this week of dog sitting was an understatement.  Luckily I have been more than pleasantly surprised.  To my shock and awe, Liam has done a 180 and is now obsessed with "Cridget" as he calls her.  She is the first thing he asks about when he wakes up and the last thing he talks about when he goes to bed.  He giggles at her all day long and loves to give her and "Pahyee" (or Polly to most) kisses.  Just from the little interaction we have had with her, I can tell she is going to be a great lifelong pet for my sister's family!  Here are a couple of cute pics. 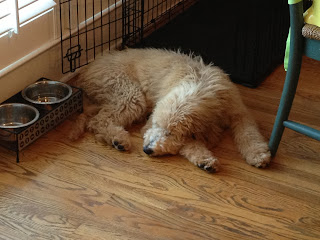 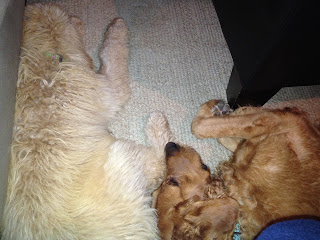 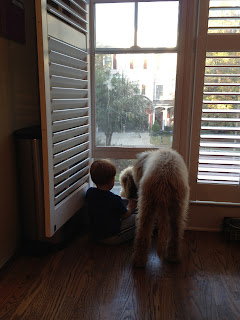 So, on top of dog sitting, we also had a "moving day" this weekend.  With this new baby our house had to change to accommodate all our needs.  Soooo, out went the dining room (honestly I think we have used it 4 times since we moved here), in went a huge new playroom for Liam and soon to be baby girl, AND Josh's office moved from upstairs to the basement so that baby girl's room can be upstairs with us.  The playroom is done (see pics below) but the soon to be nursery is still a disaster area so will be a few weeks before I post anything on that.  Liam is obsessed with the new playroom.  I'm so happy we made this decision.  He plays in there ALL the time and gets very excited to see it every morning. 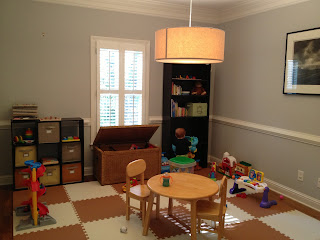 Not the best picture, but you get the idea 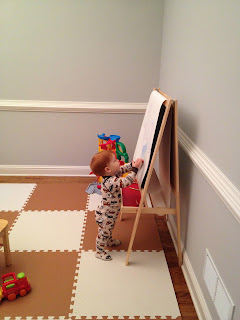 
Hard to believe that in just 2 short weeks we will be in our 3rd trimester.  Time is FLYING!  Looking forward to meeting my baby girl, but have a lot to get done before we are ready for her :)

Meghan Murphy
I started this blog when I was going through the hilarious and stressful process of wedding planning. Since then I have gone through many wonderful life changes: getting married, buying a home, raising a dog and having our first baby boy Liam. These latest entries revolve around the joys (and some not so joys) of motherhood. Hope you enjoy the journey with me!